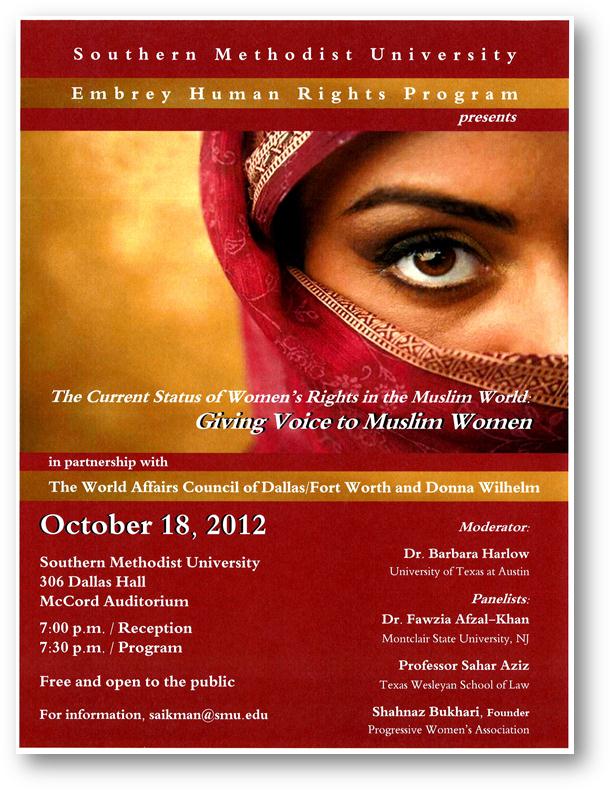 EXPERTS TO DISCUSS CURRENT STATUS OF WOMEN’S RIGHTS IN THE MUSLIM WORLD OCT. 18 AT SMU

DALLAS (SMU) – A distinguished panel of female scholars well versed in Muslim traditions and intent on dispelling stereotypes will visit SMU Oct. 18 with the collective aim of “Giving Voice to Muslim Women.”

The free public event, sponsored by SMU’s Embrey Human Rights Program in partnership with The World Affairs Council of Dallas-Fort Worth and Donna Wilhelm, will include a 7 p.m. reception followed by a 7:30 p.m. discussion at McCord Auditorium, 306 Dallas Hall.

Featured panelists will be:

Moderating the discussion will be Barbara Harlow, the Louann and Larry Temple Centennial Professor of English Literatures at the University of Texas at Austin whose interests include Arabic studies and human rights.

“Honor killings, stonings, LGBT oppression — all are taboo subjects in Muslim countries and are abuses women have to put up with at the hands of men,” says professor Rick Halperin, director of the Embrey Human Rights Program in SMU’s Dedman College of Humanities & Sciences. “This event is designed to give Muslim women a voice — one typically not heard or heard often enough.”

“There is great fear, misunderstanding and anger in the U.S. directed at Muslims, alleged Muslims and Islam in general,” Halperin says, explaining that this country has been continuously, inextricably linked to the Middle East since the 1979 hostage crisis in Iran. “What has followed have been various American invasions in the Middle East, the 9-11 attacks on U.S. soil by extremist Islamic fundamentalists, and this country’s unsuccessful efforts to negotiate a peaceful settlement between Israel and Palestine.”