Click the plus icons to find out more about each category.

In 2004, the Embrey Family Foundation began a tradition of granting in the North Texas community that continues to hold a special place in the hearts of the EFF Board and staff. Since the initial 6 grants totaling $36K in 2004, EFF has granted $6.4 million to the North Texas non-profit community to support a broad range of social programs in the areas of Education, Human Services, Human Rights, Arts & Culture, Community Enhancement and Animal Rights. Community Grants in North Texas continue to be made each year by EFF at its October Board Meeting.

As the Board and staff of EFF began learning more about the needs of the North Texas community and of the potential impact that a significant dollar commitment over a multi-year period can have on non-profit institutions, an expansion of EFF’s granting philosophy was implemented. Beginning in 2006, EFF identified 9 North Texas institutions to receive a total of $6.2 million over the seven year period from 2006 to 2012. These multi-year commitments signaled the belief of EFF in the importance of education (human rights education, arts education, access to education), the support and empowerment of women and girls, the power of play and participation in sport, and the rights of animals. In 2013, EFF extended this multi-year commitment program with continuing grants to 2 institutions dedicated to education in human rights and to education in gender rights. Since 2006, EFF has granted $9.1 million to Multi-Year Commitment Programs.

In 2009, EFF expanded its community grant making program to the state of Colorado. Grants in Colorado have primarily focused on Human Services, Arts & Culture and Animal Rights. Between 2009 and today, EFF has granted $1.8 million to organizations serving the needs of the Colorado community.

MISSION WITHOUT BORDERS – ACROSS THE UNITED STATES

DISCRETIONARY GRANTS – ACROSS THE UNITED STATES

As EFF was embarking on its Mission Without Borders initiative in 2010, EFF came to understand the value of funding grants to organizations that were either: (1) pursuing innovative strategies to address the issues that EFF was passionate about, (2) engaged in programs that were creating change by raising awareness through gatherings, convenings, performances and social media, or (3) just starting out as organizations. These organizations were not geographically limited to Texas or Colorado, but rather, were working throughout the United States. Because of the varied and unique nature of these grants, EFF began approving and funding these grants throughout the calendar year as the need for funds arose. Through the end of 2017, EFF has granted $6.26 million in discretionary grants.

DONATIONS – ACROSS THE UNITED STATES

In 2010, EFF began making periodic donations to organizations that EFF wanted to support in a general way. The work of these organizations may or may not have been totally aligned with the issues that EFF was primarily focused on, but it was work that EFF admired. Beginning in 2016, EFF began emphasizing and encouraging the donation category as a simplified process for our non-profit partners to receive funds when the amount of the funds being requested was below $25,000. This simplified process allows our non-profit partners to spend less time on fund acquisition and more time on doing the work that they have been established to do. EFF has currently funded $1.2 million in donations. 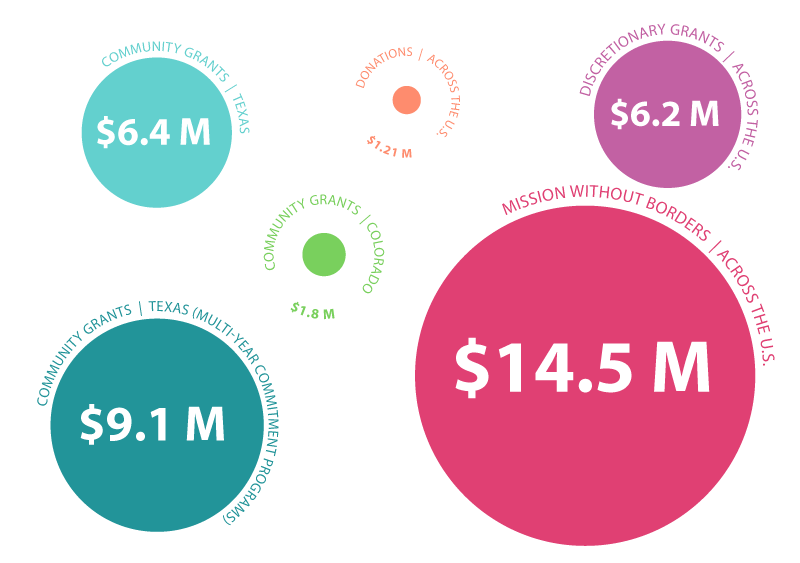