In 2004, the Embrey Family Foundation began a tradition of granting in the North Texas community that continues to hold a special place in the hearts of the EFF Board and staff. Since the initial 6 grants totaling $36K in 2004, EFF has granted $5.2 million to the North Texas non-profit community to support a broad range of social programs in the areas of Education, Human Services, Human Rights, Arts & Culture, Community Enhancement and Animal Rights. Community Grants in North Texas continue to be made each year by EFF at its October Board Meeting.

As the Board and staff of EFF began learning more about the needs of the North Texas community and of the potential impact that a significant dollar commitment over a multi-year period can have on non-profit institutions, an expansion of EFF’s granting philosophy was implemented. Beginning in 2006, EFF identified 9 North Texas institutions to receive a total of $6.1 million over the seven year period from 2006 to 2012. These multi-year commitments signaled the belief of EFF in the importance of education (human rights education, arts education, access to education), the support and empowerment of women and girls, the power of play and participation in sport, and the rights of animals. In 2013, EFF extended this multi-year commitment program with continuing grants to 2 institutions dedicated to education in human rights and to education in gender rights.

In 2009, EFF expanded its community grant making program to the state of Colorado. Grants in Colorado have primarily focused on Human Services, Arts & Culture and Animal Rights. Between 2009 and today, EFF has granted $950K to organizations serving the needs of the Colorado community.

Mission Without Borders – Across the United States

Discretionary Grants – Across the United States

As EFF was embarking on its Mission Without Borders initiative in 2010, EFF came to understand the value of funding grants to organizations that were either: (1) pursuing innovative strategies to address the issues that EFF was passionate about, (2) engaged in programs that were creating change by raising awareness through gatherings, convenings, performances and social media, or (3) just starting out as organizations. These organizations were not geographically limited to Texas or Colorado, but rather, were working throughout the United States. Because of the varied and unique nature of these grants, EFF began approving and funding these grants throughout the calendar year as the need for funds arose. Through the end of 2014, EFF has granted $1.6 million in discretionary grants.

Donations – Across the United States

In 2010, EFF began making periodic donations to organizations that EFF wanted to support in a general way. The work of these organizations may or may not be totally aligned with the issues that EFF primarily focuses on, but it is work that EFF admires. EFF has currently funded $290K in donations. 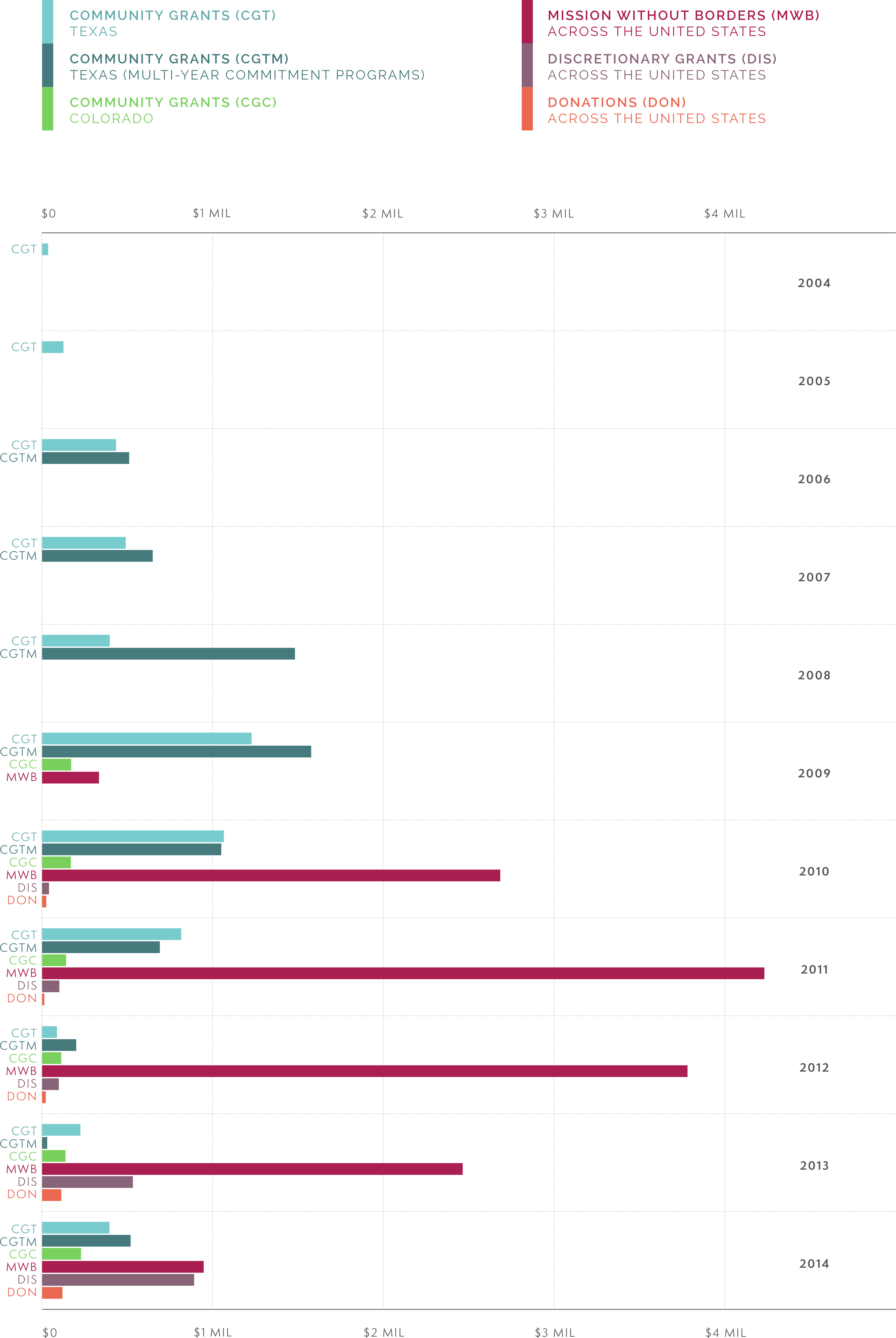 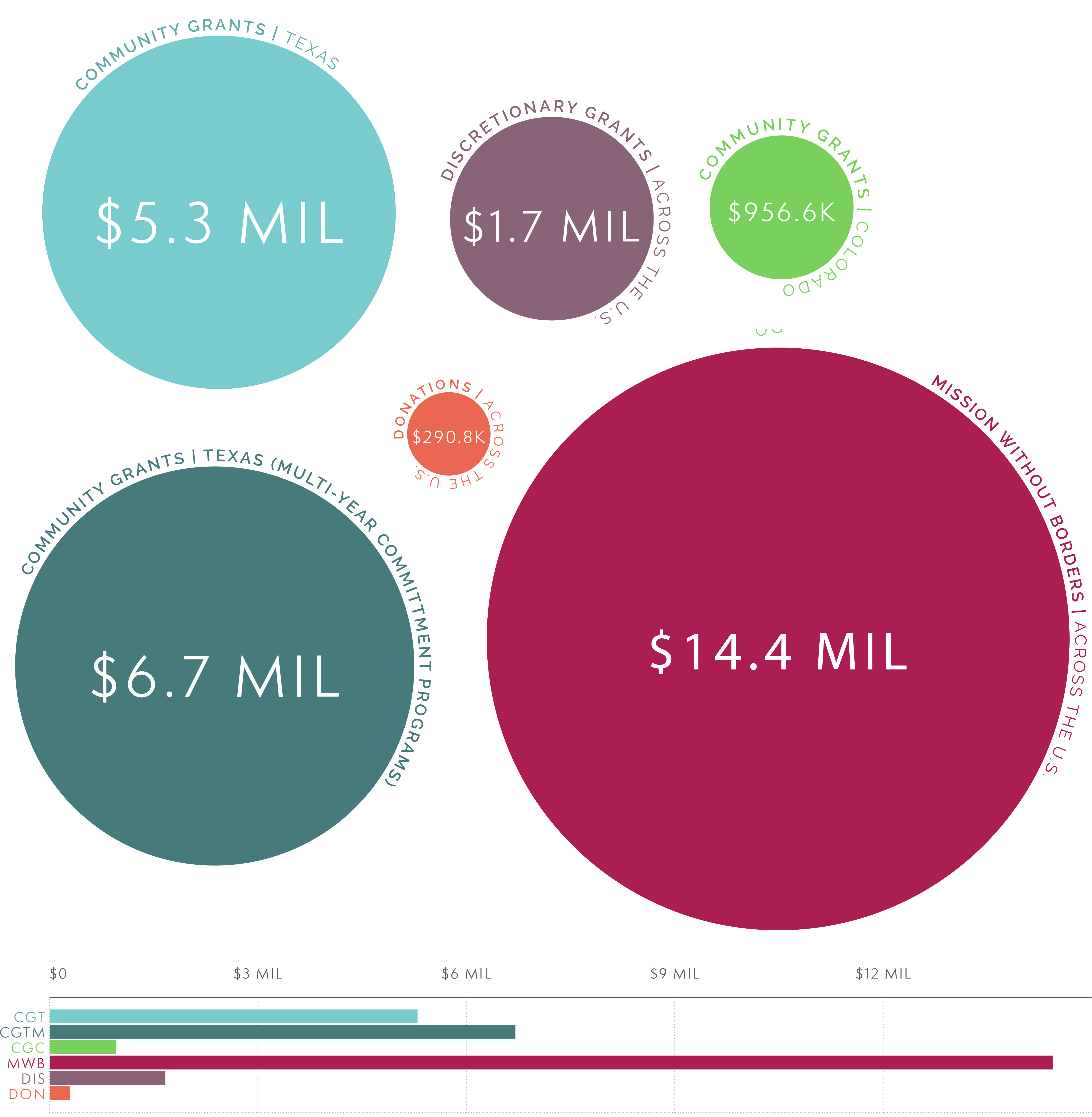 One Foundation’s Down Payment for Human Rights

Mission Without Borders was created in 2010 to catalyze real systemic change to counter injustices with dire consequences to our society and its members.

MWB was started at a moment when many in the US were awakening to the depth of human rights issues in the USA and its communities—large and small. Civic and human rights leaders also were noticing the growing scale of domestic human trafficking; the media sexism against women political candidates was undermining campaigns in several parts of the country and racial and gender inequity was creating bigger economic gaps for women and especially women of color. The Embrey leaders perceived the urgency of circumstances in which women found themselves regarding human and economic rights.

Could a young, medium-size Foundation make a difference in these outsize challenges? The Foundation leaders said, “YES!” and made four key decisions:

Focus on intersections of major themes that are central for gaining human rights/women’s rights:

Design strategy with a change- model that aims for systemic social change:

More on the Embrey Human Rights Education and Awareness Program

The Foundation funded a total of 13 core organizations with multi-year grants over the five years and set to work as a forward-thinking funder using some of the best practices in social change models; collaborative learning; highly engaged grant making; emergent strategy design; participatory evaluation; and high-leverage actions including board-level leadership roles with some of the bigger grantees and a commitment to impact investing (a goal of 100% of its portfolio). In addition the foundation committed itself to initiate and support innovation in its own work and that of its grantees. Mission Without Borders has catalyzed important and immediate results as well as far-ranging ripples of change.

The centerpiece commitment of Mission Without Borders is the founding support for a Human Rights Program at Southern Methodist University. Now known as the Embrey Human Rights Program, it engages faculty from disciplines across the university to find and teach to the human rights issues in their disciplines; and the program enables students to learn together through on campus activities and travel about human rights struggles globally.

The Center’s program is creating leadership for human rights in its students and faculty. And the University itself has emerged as a leader of human rights education in the higher education field. SMU’s Embrey Center is used by many others as a model for education and action.

MWB supported the development and sustainability of the U.S  Trafficking Hotline and the Colorado model for identifying and organizing strategic and effective community responses to trafficking.

Pushed and Pulled Gender and Race into Central Strategic Positions

The plight and potential of women and girls is at the core of MWB’s design and the MWB grants seeded efforts big and small to move gender lens thinking into the center of human rights, human trafficking, and media.

An interest in defining and clarifying the ways in which institutionalized racism holds back human rights and women’s equality led Embrey and the MWB to turn the attention of Dallas leaders to the significance of race in achieving the vision and aspirations of the city.  MWB initiated a partnership with Race Forward (a national resource organization) and also organized a local Dallas coalition of non  profit organizations, civic leaders, churches into Dallas Faces Race.  In November 2014 more than 200 local Dallas leaders joined the other 1400 leaders at the Race Forward conference hosted in Dallas.  Dallas Faces Race forum will continue to carry the work forward.

Positioned the Arts as Social Change in Conflict and Forgiveness

The Arts as a Tool for Social Change took shape through two major strategies:

The Foundation optimized its resources in every possible way. The maximum number of grants were made; a discretionary fund for smaller ventures and small supportive gifts extended seed support for many; the endowment was invested in mission-driven impact opportunities; and the Embrey sisters and their staff members invested time and effort mentoring and connecting their grantees and ultimately also served on the boards of many MWB grantee organizations. 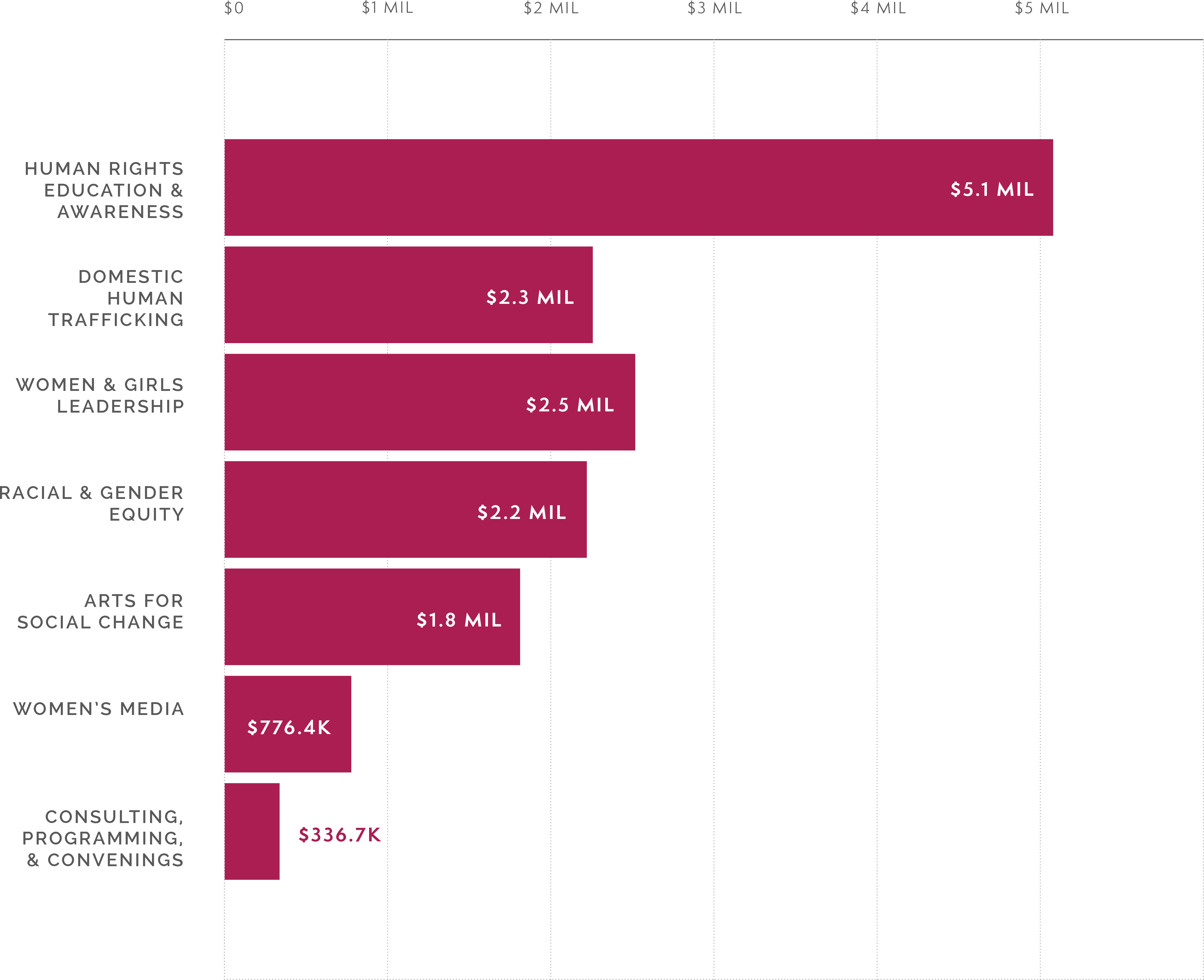 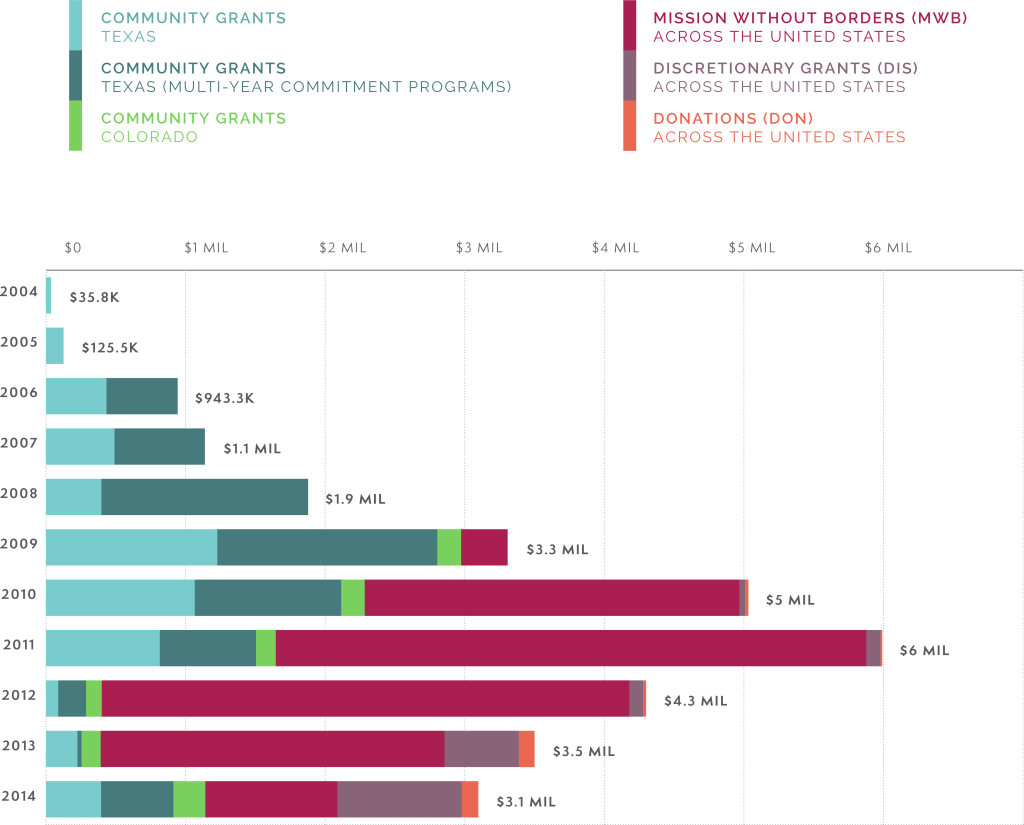